A German customer of Collé Rental and Sales took on the challenge: the construction of the Bharati research station in the Antarctic. A project characterised by extremes. Collé fitted out more than 130 containers, and a further 200 containers of equipment were shipped out. It was crucial that nothing was left out, as with the tight construction schedule it would be impossible to send anything on later. Collé supplied a number of machines to be used in the construction of the research station. These machines went literally right round the world.

Our expertise was severely tested during this project. We carried out various technical modifications on the machines to allow them to perform optimally in extreme conditions. The engines were converted to use kerosene, the only energy source available in this part of the world.
Collé were also required to go to extremes in the area of service and maintenance. Every machine was provided with an extensive maintenance and spare parts package, together with the necessary manuals. It would be impossible to send for spares later. These complex preparations and the technical modifications bore fruit: no problems were experienced with the machinery during its time in Antarctica.

Every last detail needed to be considered during the project. The three-storey structure was brought over from a 12,000 m2 site in the port of Duisburg. It was then packed up, unpacked again and erected as a test, and then dismantled again for shipping to Antarctica via Antwerp and Cape Town. The station was constructed during the Antarctic summer.

The modern and efficient polar station was built in an area where there was previously nothing but snow, ice and stones. Now there is an operational research station with its own power and water supplies. Three heat and power installations provide a pleasant temperature within the structure. The installations also have to run on kerosene. This extreme project was completed in 5 months. Some of the machines remained in Antarctica where they are still in use. The client was full of praise for the pleasant and professional collaboration with Collé. This polar expedition was also an instructive and ultimately highly successful project for Collé. 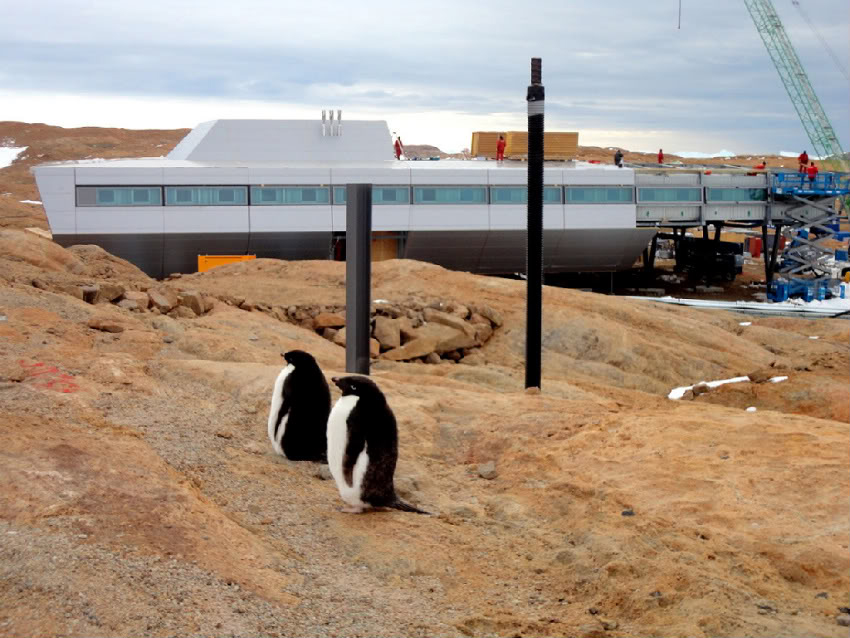